A tribute to Alex Brosque – twelve goals in ten clips 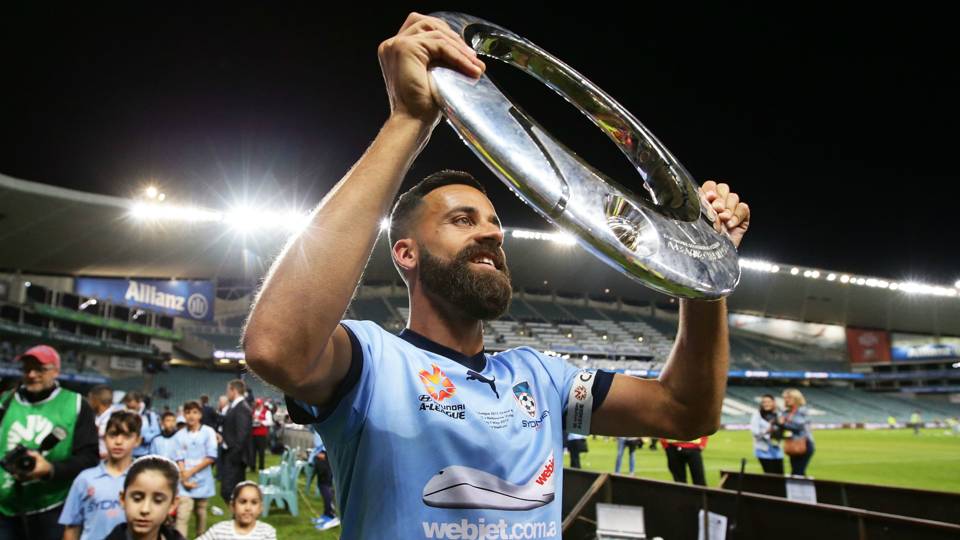 Few players mean as much to Sydney FC fans as Alex Brosque and unfortunately, the great man has decided that it’s time to hang up his boots. Tributes have been pouring in from current and former team-mates and all of them are keen to say what a great player and person he is. Rather than just talking about my favourite moments, I wanted to highlight some of his milestone goals, including some way back when he first joined. Hopefully this will remind us of some of the great memories he gave to Sydney fans and maybe bring to light some goals and games people haven’t thought about in years. Below are ten goals (twelve really) that are all milestones for Brosque’s time at Sydney FC in one way or another.

Brosque joined Sydney FC in 2006, at the age of just 22. He had come through the Australian Institute of Sport and then the Marconi Stallions before that, before playing for Westerlo in Belgium for the 2004-05 season. Returning to Australia, he signed for Brisbane Roar in the newly-created A-League for 2005-06. After spending a season there, scoring 8 league goals, he returned to his hometown of Sydney for the 2006-07 A-League season and started what would be a long commitment to Sydney FC.

Fans didn’t have to wait long to see him play his first game or score his first goal. In the Pre-season cup in July 2006, Brosque returned to Queensland to play against the Roar. He scored the third goal in a 2-1 victory and he was off the mark for the club he would go on to score so many for:

Brosque would go on to score another 2 goals in that Pre-season cup as Sydney went on to get to the Semi-Final. Brosque’s first league goal took much longer to get, however. It wasn’t until Round 17 of the League that Brosque managed to put it into the back of the net as he scored the only goal in a 1-0 victory over Perth Glory (skip to 4:55 for the goal):

Once he started scoring, he really found his form. Brosque scored in the next game that season and in the last regular season game too. That season, Sydney FC made the Semi-Finals, where we played Newcastle Jets. This was when Brosque scored his first finals goal for the club. Brosque scored the opening goal in what would be a 2-1 win (watch from start):

While Sydney FC lost that two-legged Semi-Final on aggregate, there was still the club’s first ACL trip to look forward to. Brosque played the entirety of all six of those games and was able to score his first ACL goal for the club against Persik Kediri (skip to 5:50 for the goal). AS of the time of writing, Brosque has scored 4 ACL goals for the club across the 2007, 2018 and 2019 ACL campaigns:

Brosque had a far more successful 2007-08 season compared to his first one as he scored 8 goals for the club. Included in these, in the final round of the season, he scored his first league goal against Melbourne Victory (he had scored against them in the 2007-08 Pre-season cup, but the league goal feels more important). The goal contributed to a 2-2 draw (skip to 4:37 for the goal):

Brosque was there for the 2010 Grand Final, where he played almost the entire game including extra time before being subbed off in the 115th minute. This means that he wasn’t able to take a penalty in that game, but he was with us as we witnessed maybe the sweetest Grand Final victory in the club’s history. He started the 2010-11 season with the club, but come the January transfer window he moved on to Shimizu S-Pulse in Japan for the 2011 and 2012 seasons and then onto Al-Ain after that.

Then, in 2014, Sydney FC came calling and how could he refuse? He made his big return to the club against Sydney United 58 FC (a nice touch, given their rivalry with Marconi). While he didn’t captain the club that day, he has been captain for every game after that which he started. He may not have scored on debut this time, but we certainly didn’t have to wait long. His first goal on return to the club was in Round 2 of the 2014-15 A-League, where he scored the winner in a thrilling 3-2 Sydney Derby. This was his first game against Western Sydney and also, of course, his first goal against them. He has since become our highest ever goalscorer against them (skip to 1:30 for the goal):

The very next game after the Derby goal, Brosque also hit another milestone, as he scored his first FFA Cup goal. He scored 7 FFA Cup goals in his career, including 3 this season. This goal came in a 1-3 defeat to Adelaide, but Brosque’s goal gave us a fighting chance by forcing the game into extra time (skip to 0:35 for the goal)

Of course, a man who was with us for this long was always going to get to some impressive milestones and in the 2015-16 season he reached one particularly big one. Brosque scored his 50th goal for Sydney FC in all competitions against the Central Coast Mariners on Boxing Day in 2015. He remains one of only two players to reach this milestone (the other one is Bobo). In his career, Brosque has scored 10 times against Central Coast (skip to 0:20 for the goal, but he does score another one later):

Throughout 2016/17 Brosque captained what will go down as one of the best ever A-League sides. Brosque played a pivotal role in such a talented side as he scored 11 goals and led us to the title. There weren’t too many interesting milestones in this season for him, but he did take our first penalty in the A-League Grand Final. I don’t need to tell anyone reading this how that turned out:

Finally, this season saw Brosque reach another milestone with the club. Despite scoring so many goals, he had never scored a hat-trick for us. On January 4 this year, however, he finally got his first hat-trick for Sydney FC. He was playing Central Coast and took advantage of an early sending off to put three past the keeper:

Brosque will be so missed on the pitch. As the above goals show, he is capable of scoring so many different ways and he has been such a reliable goal-scorer through some of the best periods of the club’s history and a breath of fresh air through some bad times too. It sounds like he will still be hanging around the club in some capacity, and I’m sure he’ll be at our games, but it is just going to feel like a very different club.

Farewell Alex, we will never forget the times you’ve given us.

Share your favourite memories of Brosque here on the forum