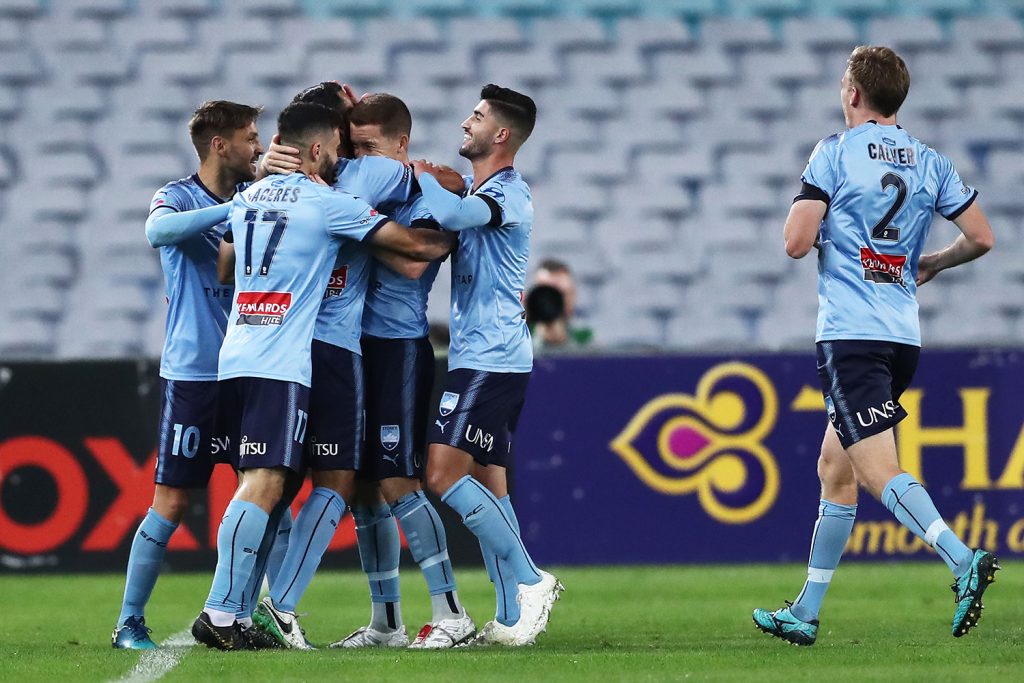 It’s been a crazy week with some incredibly tough and important games. We can be proud that our boys managed a result in all 3 of them, even if the 1-1 draw in this game wasn’t the result we were looking for.

The game really could not have started better for us, which has been a bit of a theme lately. We played well to start, and it didn’t take long to break through. Brosque received the ball from Caceres, who was driving from deep. With a defender and the keeper still to beat, our captain slotted it past Janjetovic to put us 1-0 up over our cross-town rivals. Brosque is always up for the derbies and this one was no exception. With the latest news about his retirement, we are really going to miss him.

Throughout the early part of the game we were dominant in possession, however we really weren’t able to capitalise on it that much. We looked quite slow throughout most of the game, perhaps a result of playing 3 games in a week. Western Sydney, however, were able to really use their possession well. Late in the half we had a real scare as Western Sydney had a double chance that almost got past Redmayne, but a terrific double save denied Western Sydney. There were plenty of chances going against us but our rivals never had their shooting boots on.

We were content to sit deep and not really push our advantage throughout much of the first half and so we went in only 1-0 up but not looking confident. Brosque came off at half time, with Reza replacing him. Reza was constantly darting around the box, and would have a couple of good chances, but wasn’t able to put it into the net. He has come close a few times and has one goal to his name, but it is getting a bit worrying how little he has managed to assert himself.

Regrettably, it was Western Sydney who were able to use the ball when they had it. After looking threatening from set pieces all game, it was finally a deflected set-piece from Baumjohann that saw the ball beat Redmayne to tie it all up 1-1. No one can really take the blame for this one going in, as it is just one of those freak things that happens. However, throughout the whole game we gave up far too many easy fouls, and in many ways this was just what Western Sydney wanted from the game.

The game really didn’t offer too much for spectators after that until right near the end. Our defenders both performed admirably and Redmayne did what he needed to do. The ending, however, had everything. Both sides attacked hard in a true end-to-end performance. Le Fondre came within inches of curling the ball past the snake to secure the game, but it didn’t work. Up the other end, Majok had a great chance that he didn’t do enough with and thus the draw was intact right up to the end.

With that the game was done with neither side probably feeling satisfied or entirely upset. Our dominance of this fixture remains unbroken and this city remains ours. The Cove deserve huge props for out-singing the scant remnants of the RBB who bothered to turn up.

The above photo is from the club’s match review here: