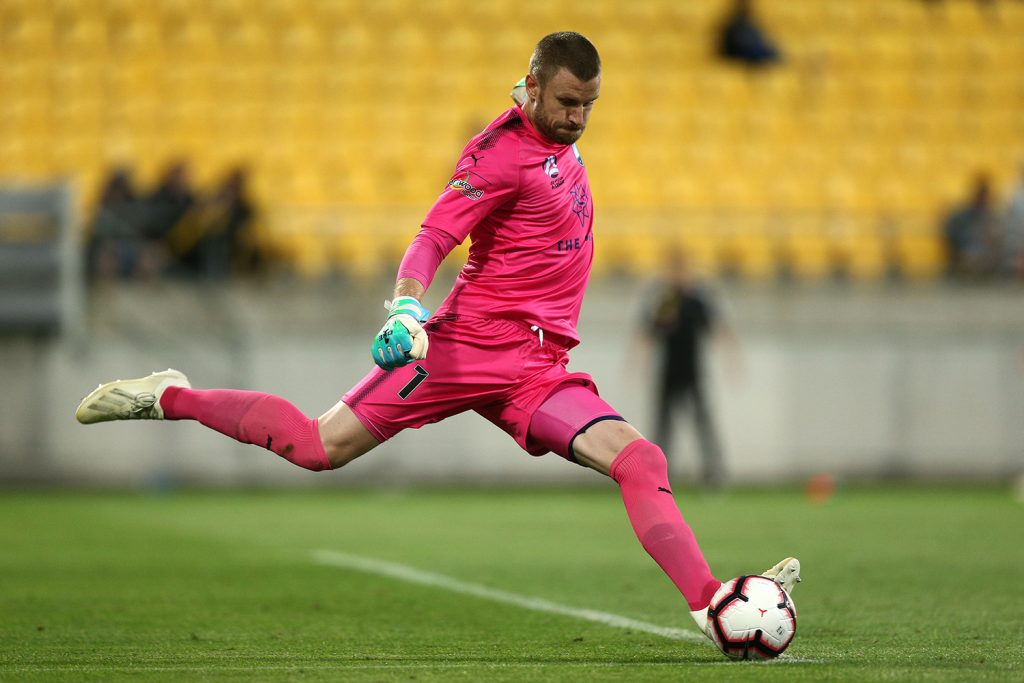 A truly good team will find a way to win no matter what is thrown a them. In this case we had to win despite two dodgy penalty calls, some atrocious weather conditions in Wellington and a couple of potentially serious injuries.

Thanks to injury and suspension, our line-ups have had to chop and change a fair bit in the last couple of weeks and this time was no exception. Ben Warland made his first start since the August Cup game against Rockdale, while Aaron Calver started at right back in place of the injured Jacob Tratt. Joshua Brillante slotted back into midfield and both Milos Ninkovic and Anthony Caceres started next to Siem De Jong in our attacking midfield. Caceres looked like he was playing as a bit of a 10 at times, often switching with De Jong, who was posted on the right.

The game started as it meant to continue – in controversy. In the 9th minute we put the ball into the box and Fenton went to control it with his body. It just so happened to also very clearly touch his arm, which he also used to control it. Somehow the referee didn’t give it straight away and, even more confusingly, the VAR didn’t overturn the referee’s decision and award the penalty.

We looked very assured in the first half, passing the ball fairly well and putting some decent balls into the box. For the first half we were helped by having the wind at our backs, meaning that the shots were coming in a little harder and clearing the ball was more difficult for the Phoenix defence. As a result the Phoenix were playing on the ground much more and couldn’t put in the looped balls that hurt us so badly last time we played. On our side Milos Ninkovic, in particular, seemed to be enjoying himself, putting a lot of balls forward on the ground for Adam Le Fondre to run onto. The Serbian playmaker was looking more and more like himself all through this game.

With Sydney FC on the rise, it was only a matter of time before the goal came and, after a goalmouth scramble, Siem De Jong poked the ball home just as Durante fouled his back leg. Even as the ball was hitting the net, De Jong had his arm up in the air and was clearly in agony. In his post-match press conference Corica said that De Jong heard a crack and we are awaiting scans to see just how bad it is going to be. Daniel De Silva came on in Siem’s place on the right wing.

This wasn’t the only enforced change in the half, however, as Anthony Caceres went down clutching his leg. He had suffered a calf strain and, while it is unlikely that his injury will be as bad as De Jong’s, it is still coming at a terrible time for us as we are robbed of another talented midfielder. Alex Brosque came on in Caceres’ place and we reverted to the 4-4-2 we started this season with.

Even though we were running into the wind in the second half, we still were looking alright, if not as dominant as we were in the first half. Adam Le Fondre was willing to try some more shots from range which have proven quite successful for him over the last month or so. His counter-attacks with Alex Brosque and Daniel De Silva looked particularly dangerous.

Most of the second half was much less exciting than the first, though the Phoenix were able to put us under some pressure. Ben Warland made at least one crucial interception that would have been a goal at around the 60 minute mark. We were also forced to deal with a lot of corners, and our centre backs proved up to the task.

However, though the play wasn’t as good, the controversy didn’t go away. Michael Zullo tackled Taylor in the box and, as he was making the tackle, Taylor elbowed Zullo in the head. After Taylor made this contact, Zullo tangled legs with Taylor and Taylor started to go down. At this point, Taylor decided to put in an Olympic-quality dive and, surprise, surprise, he received the penalty for it. Once again, somehow VAR didn’t overturn it and so Zullo not only copped an elbow to the head, but he also gave away a penalty in exchange.

Krishna walked up to take the penalty and Andrew Redmayne, after performing his magnificent dance, put in a superb dive low and to his right to save the Fijian’s attempt. This save was as good as two points for us and we were able to dig in for the final minutes of gameplay to keep the result at 1-0.

If you’ve read this far, go and vote in the SFCU player of the season poll here