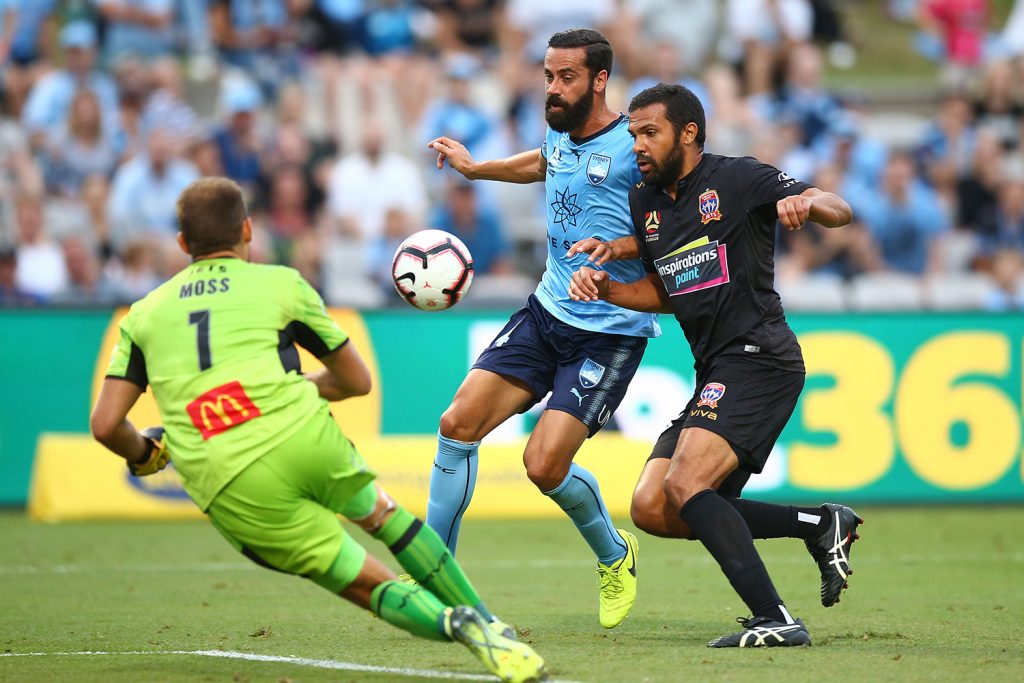 That was hardly a classic game but sometimes you just have to take the three points and be happy with them. Given that Corica was forced into a number of changes in this game, with Rhyan Grant, Joshua Brillante, Milos Ninkovic and Paulo Retre unavailable, we should just be happy with the win. On another day, it really could have been 2 or 3-0.

Indeed, Corica was forced into another change right at the start of the game. Jacob Tratt went down with a groin strain and had to come off. This forced Corica to bring Ben Warland on at centre-back and shift Aaron Calver to the right back slot. Unfortunately, these days Calver isn’t really a right back and it showed as Newcastle’s Jair was able to continually skin him and put in dangerous balls. The central defensive pairing and some poor finishing spared us too much embarrassment. Hopefully either Tratt or Retre will be available for the Wellington and Melbourne games.

We were playing well, however, dominating possession and spending most of the game in the opponent’s half. We just weren’t creating many opportunities. Siem De Jong played fairly well at times but was clearly uncomfortable playing on the left and while Daniel De Silva was able to use his speed to great effect and crafted out a decent shot or two, he just wasn’t able to provide much service to our striking pair.

Adam Le Fondre took matters into his own hands in the 19th minute when, despite being marked by the centre backs, he was able to curl a wonderful shot towards the far top corner. Only a great save from Moss prevented it from going in. This shot and the goal against Perth show that there’s more to Le Fondre’s game than just tap-ins; he can also sometimes create something from nothing.

We were struggling to create much throughout the rest of the half, until right near the end of the half, when Brandon O’Neill looped in a ball looking for Alex Brosque. Boogaard looked to cut the ball out and, in the process, turned the ball into his own net. This gave us the lead and, with the way we were holding onto the ball, we were able to relax a bit. O’Neill in particular was having a superb game. He really stepped up and showed leadership next to Anthony Caceres. O’Neill was everywhere in defensive midfield, breaking up play and distributing the ball. He also slotted in for Calver at times to provide some more cover against the threat Jair was posing.

The second half resumed much as the first half had, with Sydney holding onto the ball well but not creating too many chances. The game changed dramatically in the 73rd minute, however, as Hoffman was sent off with a straight red for lashing out. Replays show that the call was soft and he probably didn’t deserve the card. In fact, if we are being honest, key refereeing calls went our way all game. Michael Zullo really could have been sent late in the second half and the referee was even reaching for a yellow card, until he realised that Zullo was already on a yellow and thought better of it. No doubt this refereeing performance will just encourage the #SydneyConspiracy nonsense fans from other clubs (*cough* Western Suburbs *cough*) have been spouting for ages. Just remember – Sydney FC: Hated and Proud.

With the Jets down to ten men, the game was pretty well a foregone conclusion. We were happy to hold onto the ball and hit hard on the counter attack when given the opportunity. Adam Le Fondre’s pace in particular was giving the Jets’ aging defence real problems.

Luke Ivanovic, playing off the bench, created the best chance of the game. The young winger took his man on and broke into the left side of the box. He slid a wonderful cross to Adam Le Fondre, who waited too long on the chance and shot straight at Moss, who was able to save it. Ivanovic himself had a good chance later on but a good save from Moss also prevented that one going in.

Just a quick final note on the two young players, Cameron Devlin and Luke Ivanovic, both of whom impressed. Devlin provided some really great movement in an attacking midfield role, regularly drifting into good positions around the top of the box. He also came deep to break up play once or twice, which shows his versatility in midfield. Ivanovic, meanwhile, was able to use his pace to stretch play on the left and take on the Jets’ right back a few times to create chances. I’d like to see both players get more time because in their brief cameos they have shown enough to justify playing at this level.