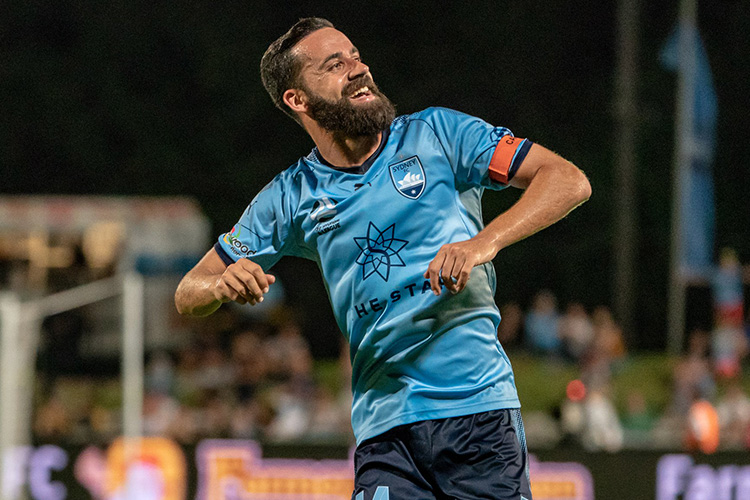 Yet another crazy game under Corica’s reign, with a scoreline that somewhat flattered us. However, you can’t really complain too much about a 5-2 win with a hat-trick for our captain, fan favourite and absolute club legend Alex Brosque.

Central Coast started the game the better side, with strong pressing and good counter-attacks. The CCM players regularly streamed forward, making up for what they lacked in skill with a high work rate and pace. After some early chances, including one which Michael Zullo had to clear off the line, CCM opened the scoring. Pain broke inside from the left and fired towards the net. Andrew Redmayne was not making himself big and he found himself completely beaten on his near post. Really, Redmayne had to do a lot better with that one. This gave Central Coast a well-deserved 1-0 lead.

CCM were unable to put their foot on our throat, however, as their central defender Cisse received a yellow card in the 21st minute for dissent and then another yellow in the 25th minute for a sliding tackle gone wrong. This gave Sydney FC a useful man advantage and a real way back into the game. However, the team’s performance didn’t lift like you’d expect. We were lacking real width to stretch the weakened defence and few players were looking to play balls in behind. Paulo Retre, while a solid second choice right back, lacks the dynamism of Rhyan Grant and wasn’t able to provide the same pace and width down the right.

Siem De Jong was the only player looking to switch the direction of attack or put in killer balls to try to beat the defence. It was the Dutchman’s best game for the club so far and another indication that he is starting to get over the injury problems which have plagued his start at the club. This is in contrast to Milos Ninkovic who hasn’t really looked himself this season. He was involved a lot more this game and had some good shots on goal, but he just couldn’t put one in the net.

The second half started strongly, however, with a noted sense of urgency. It didn’t take long for this to bear fruit as De Jong put in a cross from the edge of the box on the right. Alex Brosque side-heeled magnificently with his right boot and this played it all the way across the goal and past Kennedy in goal.

With the scores tied, Sydney FC were able to take the lead shortly after as Adam Le Fondre was brought down in the box by Melling. While some have claimed that this was a controversial decision, it is pretty clear that Melling caught Le Fondre’s back leg before making contact with the ball. Le Fondre stepped up to take the penalty and buried it, becoming the fastest player to ten A-League goals in the process.

Sydney weren’t done, however. Breaking quickly with the ball, Le Fondre played a superb cross which landed right on Brosque’s head. Kennedy was able to save this, but the deflection fell to Brosque who put it away on the second time of asking. While Brosque is often very reliant on his left foot, he has scored quite a few of his goals with his right, including both of these two. This gave Sydney FC a commanding 3-1 lead.

Sydney FC were breaking well with the ball and dominating possession at this point. De Jong, who was having a great game and taking full advantage of the gaps in CCM’s defence, put a through ball in in the 64th minute. Brosque ran onto it and, with Kennedy closing him down, chipped the keeper almost nonchalantly. This goal gave him his first Sydney FC hat-trick. What more can we say about Brosque at this point? The man is an absolute club legend and has never really stopped scoring goals. It says a lot about his mentality that he was only supposed to be a bit-part player this season and yet he has stepped up to the first 11 without blinking. He has been asked to press for almost a full game every week and with more of the goalscoring burden on him, he is still putting in performances like this one.

CCM struck back soon afterwards to make it 4-2. Millar, who has been CCM’s most impressive player this season, broke down the right, beating Zullo. His cross found the onrushing Aidan O’Neill, who buried the ball in the back of the net. This continues something which was noted in the previous game: we continue to switch off after getting a strong lead in games, potentially allowing our opponent back into it.

The Sydney players were happy to keep possession at this point, probing and trying to stretch the defence a bit more. However, it was only from a corner right near the end of the game, in the 90th minute, that Sydney were able to extend their lead still further. The corner was played out to Joshua Brillante on the edge of the area. He looped a cross right over the head of the defence and it found Aaron Calver, who was having another very solid game for the club. Calver hit the ball sweetly on the volley and it sailed right past Kennedy into the net. It was great to see Calver score his first goal for the club; he has been here quite a long time, happy to wait for his chance to cement a starting spot. You get the sense that this run of games might just be his best chance yet.