A disappointing defeat against Victory on Sunday might bring us down to earth: this very clearly isn’t the same team as it was during Arnold’s tenure. This game, however, presents a great opportunity to pick ourselves up from a disappointing result. The Mariners are winless from their first 5 games (in fact CCM haven’t won a competitive game since February). There were some positive signs from CCM on Sunday as they really challenged the Glory. It took a last-minute winner for Perth to come away with all three points.

CCM do have some firepower on paper, with Ross McCormack being the obvious name. He has only scored once this season but he showed in his time at City that he can find the back of the net when given a chance. Otherwise, there have been scattered goals from throughout the team with no real standouts. Kalifa Cisse received a red card late in their game against Perth, so Jake McGing is likely to step in at centre back.

Ultimately, this is the sort of game that we should be winning. If we can’t beat a bottom-of-the-table Mariners side, then we will seriously have to reconsider our chances of competing for the title this season. Hopefully this presents a good opportunity for our attack to gel a little bit more against weaker opposition and our full backs may be able to put in crosses which are more suitable for Adam Le Fondre.

After Sunday, Corica has a couple of changes which he might want to mull over. Daniel De Silva is ineligible to play against CCM, because they are his parent club, freeing up a bench spot for one of the youth players (maybe Marco Tilio?). Of course, if Siem De Jong is back to fitness, it would be a great opportunity to ease him back in with some minutes off the bench. Corica might also wish to consider putting Aaron Calver in for Jop van der Linden, though it is hard to see him doing that off the back of just one game. Given this, our team is likely to remain the same: 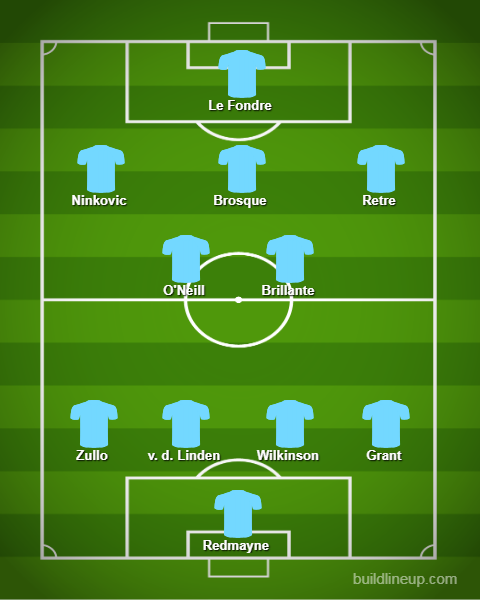 The Cove express leaves Central at 2:21 and pregame drinks are at The Gosford Hotel:

A majestic winner from the Albino Messiah.

Most Appearances vs CCM – Alex Brosque (22)*