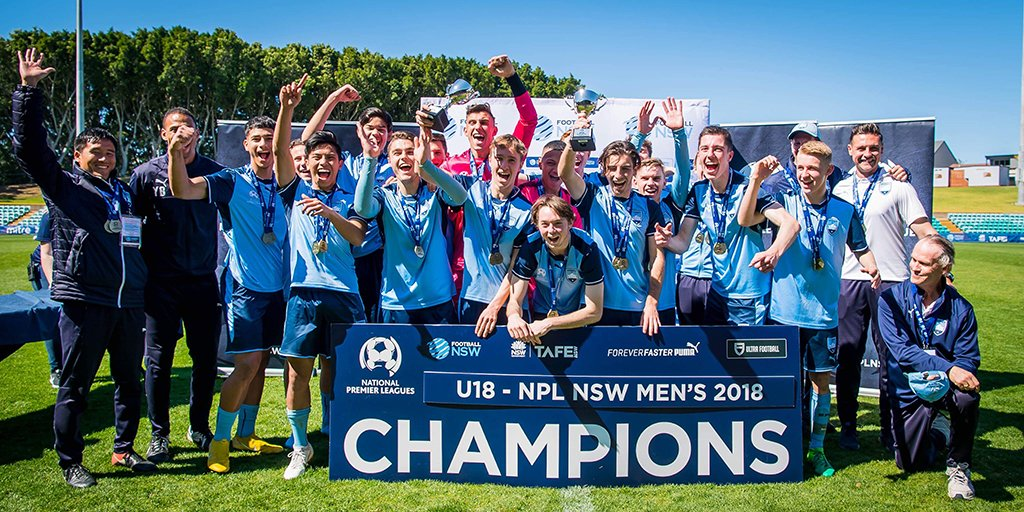 Under 18s and Under 20s Grand Final – Match Report

The U18s kicked off at 10:00 in beautiful weather. The first twenty was largely a cagey affair with Sydney having more of the ball but Rockdale pressing well to keep Sydney at bay. In the 18th minute Rockdale has a good effort coming to the byline down the left but Adam Pavlesic got down to cut it off and it was cleared. After that though, Sydney had the better of the play.

Jayden Kucharski, from right back, broke down the line and then tried to chip the keeper from about 40 out, hitting the crossbar. The keeper may not have got to it otherwise so it was a great effort. Syd year had a couple of other good efforts from range and forced a great save after Callum Talbot was released down the right. There was absolute mayhem when Sydney got into the box at one point and Harry McCarthy was pulled down. The referee signaled for a penalty but the linesman was flagging for offside, causing the Rockdale players to mob the referee. The referee reversed his decision and carded two of the Rockdale players for abusing him.

Rockdale caused some problems throughout the first half with long balls but gradually Sydney asserted themselves and forced Rockdale to sit deeper.

The second half started slowly, with both teams reluctant to over-extend. Rockdale had the best chance of the early stages with a free header in the box that one of their players sent wide. Jake Hollman provided a great chance for Sydney at about the 60th minute, as he dribbled past three or four players with a fantastic drive and shot from range. The keeper only just got to the ball, tipping it onto the post and out. The contest was fought extremely hard at this point, with lots of fouls from both sides.

Sydney continued to struggle to put the final ball into the box, but finally, in the 85th minute Alex Masciovecchio was put through in a one-on-one situation. As the defender forced him wide, he shot and slotted it past the keeper to make it 1-0. It was a truly great finish and capped off a good season for the left winger.

Rockdale played for an equaliser and in the 92nd minute there was a loose ball in the box, but the Rockdale player sent their shot wide. With that, the Under 18s were crowned champions! Congratulations to all the boys!

My Sydney man of the match was probably Callum Talbot, who provided some great attacking options all game and really stretched the play.

Next up was the Under 20s, who started their game at 12:30. Sydney and Sutherland were vying for the title all season so it was bound to be a great game. The game started off with a bang as Marco Tilio chased onto a ball into the box. He arrived at just the same time as the Sutherland keeper and centre back, but was able to lift his leg to get enough of a touch on it to send it into the back of the net. It was another example of the athleticism Tilio has shown all season.

Sutherland responded with some great, flowing attacking play and they too were very physical in their approach, trying to break up the Sydney attack. They were rewarded for their attacking approach as they put a stinging shot past keeper Mitchell Evans from the right of the park. Sydney had a few more chances to pull back ahead early on, with Harry van der Saag taking a shot form range, Ryan Teague getting a header in the box that went just wide and Ben Koop just generally causing havoc.

The second half was a fair bit slower than the first had been, but the Sharks took the league after Sydney failed to clear a ball in the box from a corner, making it 2-1. Sydney were struggling to get the final ball into the box, though set pieces were starting to cause some problems. Indeed, it was from a free kick that Sydney would find the equaliser. It was Marco Tilio again. He took a free kick from the left of the park, about half way between the corner flag and the top of the penalty box. His delivery was superb and it evaded all the defenders and went past the keeper to even the score at 2-2. It was the 70th minute.

From that point on, the Sydney boys were pretty much in control of the game, creating a number of chances. The best came when Jordi Swibel played Daniel Maskin in, but Maskin sent it just wide with a right-footed effort on the left-hand side of the box. Mitchell Evans made a superb one-on-one save in the 85th minute, preventing the loss. Finally, in the 94th minute, Ben van Meurs got on the end of a Tilio free kick, but could only hit side netting, so it was on to extra time.

The Sharks players were already clearly struggling with cramp going into extra time and Sydney used this to their advantage, constantly pressing for the winner. Jordi Swibel in particular was superb. He had a delightful back heel that almost found its way inside the far post in the first half of extra time. In the second half of extra time he had a good effort from the top of the D. Sydney had a great opportunity when they were awarded an indirect free kick inside the Sutherland box. Tilio teed it up for Swibel, but he just couldn’t get past the wall. Just before the end of the second half of extra time, David Malishev was brought on, presumably in imitation of when the Dutch did it at a World Cup.

My Sydney player of the match for this game was undoubtedly Marco Tilio for the two goals and for being a constant threat. Seriously everyone, keep your eye out for him and come down to a youth team game to watch him play.